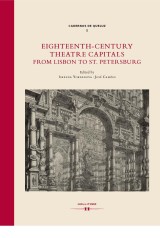 The fifth volume of the series Cadernos de Queluz intends to broaden the conceptual and geographical perspectives on the pan-European history of music theatre. The cultural and ceremonial patterns common to eighteenth-century European courts created complex webs of meaning around the sovereigns who communicated via the arts, which found expression in an architectural, artistic, and musical code. The existence of a common artistic language among European countries facilitated the circulation of musicians, theatrical companies, architects, librettists, and craftsmen within a single network, challenging the orthodox conceptual distinctions between European cultural traditions. This book is a virtual journey among the artistic exchanges between the European capitals, weaving them into one single narrative, underlining the common patterns of musical practices throughout the Continent, from West to East. The road map starts from the kingdom of Portugal and passes through Madrid, Paris, the Papal States, Naples, Milan, Vienna, and ends in St. Petersburg.

Il disertore and Maestro Leali, or the Making of a Pastiche
and the Invention of a Composer
David Cranmer

José Camões is professor of the Theatre Studies postgraduate programme in the School of Arts and Humanities, University of Lisbon. He is a researcher at CET – University of Lisbon, and his fields of research include History of Theatre, Textual Criticism, and Digital Humanities. He is the scientific leader of several projects about the History of Portuguese and Iberian Theatre.