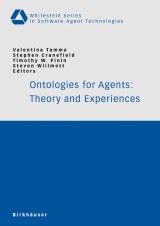 Ontologies for Agents: Theory and Experiences

There is a growing interest in the use of ontologies for multi-agent system app- cations. On the one hand, the agent paradigm is successfully employed in those applications where autonomous, loosely-coupled, heterogeneous, and distributed systems need to interoperate in order to achieve a common goal. On the other hand, ontologies have established themselves as a powerful tool to enable kno- edge sharing, and a growing number of applications have bene?ted from the use of ontologies as a means to achieve semantic interoperability among heterogeneous, distributed systems. In principle ontologies and agents are a match made in heaven, that has failed to happen. What makes a simple piece of software an agent is its ability to communicate in a ”social” environment, to make autonomous decisions, and to be proactive on behalf of its user. Communication ultimately depends on und- standing the goals, preferences, and constraints posed by the user. Autonomy is theabilitytoperformataskwithlittleornouserintervention,whileproactiveness involves acting autonomously with no need for user prompting. Communication, but also autonomy and proactiveness, depend on knowledge. The ability to c- municate depends on understanding the syntax (terms and structure) and the semantics of a language. Ontologies provide the terms used to describe a domain and the semantics associated with them. In addition, ontologies are often comp- mented by some logical rules that constrain the meaning assigned to the terms. These constraints are represented by inference rules that can be used by agents to perform the reasoning on which autonomy and proactiveness are based.

Ontologies for Interaction Protocols.- On the Impact of Ontological Commitment.- Agent to Agent Talk: “Nobody There?” Supporting Agents Linguistic Communication.- Ontology Translation by Ontology Merging and Automated Reasoning.- Collaborative Understanding of Distributed Ontologies in a Multiagent Framework: Experiments on Operational Issues.- Reconciling Implicit and Evolving Ontologies for Semantic Interoperability.- Query Processing in Ontology-Based Peer-to-Peer Systems.- Message Content Ontologies.- Incorporating Complex Mathematical Relations in Web-Portable Domain Ontologies.- The SOUPA Ontology for Pervasive Computing.- A UML Ontology and Derived Content Language for a Travel Booking Scenario.- Some Experiences with the Use of Ontologies in Deliberative Agents.- Location-Mediated Agent Coordination in Ubiquitous Computing.- An Ontology for Agent-Based Monitoring of Fulfillment Processes.

<p>The area of ontologies for agents is novel and despite its relevance for e-commerce and semantic web applications, there are presently few resources addressing this area</p><p>The book provides an overview of the main theoretical problems as well as real applications translating theory into practice</p><p>The book aims to bridge the gap between the agent and the ontology community</p>